Yosemite National Park is justifiably famous for amazing views. From Glacier Point to Olmsted Point to Tunnel View, Yosemite provides visitors with stunning, jaw-dropping scenery on a grand scale. Though these landscapes are shared again and again, they always captivate the viewer – there is never a “meh” moment with the most famous views in Yosemite. But what about the not-so-famous views? Or perhaps you have wished you could have the view all to yourself? In the list below, you’ll find the famous, the lesser-known and even some private views of the sights of Yosemite. 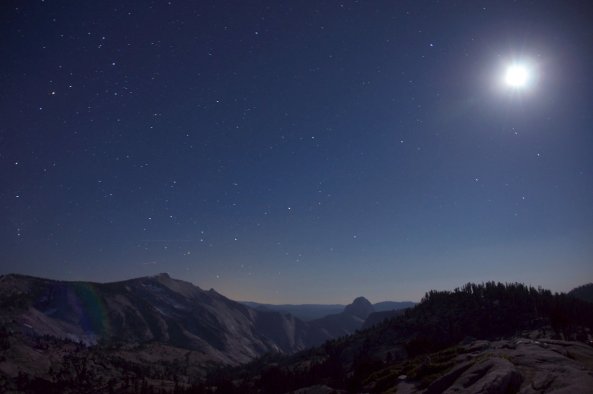 As part of an ongoing series, we’ll feature the favorite places of Yosemite community members and park visitors. Olmsted Point is a favorite spot of Chris Publiski, who lives and works in Yosemite Valley. Recently, Chris joined some friends to capture night sky photography from the top of the dome located across the road from the Olmsted Point pullout on Tioga Road. “As the sun set and the tourists started to leave, it was exciting to think we were sticking around. The first few shots I took were of the moon making its way towards the horizon. As it was a full moon, I couldn’t capture too many stars. I still got a pretty good shot of Clouds Rest and Half Dome in the moonlight. Being on top of the dome at night was so amazing. Being able to look up at the night sky, and have the ground drop on all sides around you and seeing nothing but stars was so beautiful. I’ll never forget that. Knowing we were up there and no one else knew it as they drove by was kind of like being on top of the world.”

Olmsted Point is a lookout in Yosemite’s high country, located on the Tioga Road, also known as CA Highway 120. From here you can see Cloud’s Rest and look down on Yosemite Valley with an alternative view of Half Dome. Actually, you see the rounded side of Half Dome instead of the flat face that is the most famous view looking up from Yosemite Valley. The turnout for Olmsted Point is frequented all summer long as visitors make the trek from Yosemite Valley to Tuolumne Meadows or vice versa. Surrounded by granite slabs and breathtaking views, it provides the perfect rest stop for your journey through the park.

Olmsted Point was named for Frederick Law Olmsted, the landscape architect perhaps best known for his design of Central Park in New York City. However, Olmsted’s influence on Yosemite National Park is significant. In 1864, while overseeing mining property in the foothills of the Sierra Nevada, the governor of California appointed Olmsted as chairman of the Yosemite Commission. His 1865 report, “The Yosemite Valley and the Mariposa Grove of Big Trees: A Preliminary Report”, established precedent as the first interpretation of a government’s duty to preserve public lands for its citizens. This in turn laid the groundwork for the creation of state and national parks.